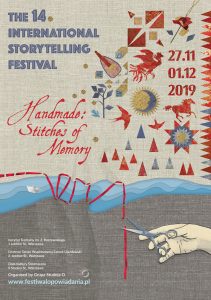 The 14th edition of the Festival has attracted artists who uniquely approach the art of storytelling, specific to their traditional forms of the fading legacy of storytelling. They bring to light stories and subjects otherwise overlooked, forgotten, or banned from collective memory. In the traditional stories, we will be looking for “absence, silence – lack of representation” thus turning our attention to the concept of counter-memory. According to George Lipsitz, counter-memory looks back at hidden stories excluded from the prevailing narrations, therefore calling for a revision of the official version of a story by conveying new perspectives related to the past.

At the same time, we will be looking for relations between storytelling and traditional handmade technologies (sewing, weaving, embroidering, artistic carpentry). We will be uncovering warps and wefts which, when handled by hands, are a form of telling a story, an extension of hands, a latent form or a replacement.

From Iran will arrive Masoud Akrami, a contemporary shahnamehan, an actor, a man of the theatre who makes an informed effort to go back to telling the Shahnameh epic poem. An art disappearing from Iran and inscribed as part of the UNESCO World Heritage. Masoud manages to touch upon motives and topics typically disregarded by traditional storytellers.

After 13 years, we will welcome again Jan Blake, a charismatic and spontaneous storyteller from Jamaica and the UK who was the star of the first 2006 festival. Jan will take us to a world of a Mali Odyssey,  epic poem about Sundiata Keita, the legendary founder of Mali. However, she will do this from a woman’s perspective. Following ancient associations, we will also witness Caribbean Transformations that may end in the spectators’ tears.

We have also invited Olivier de Robert, a storyteller from France. He is a successor of the local village “raconteurs” and a modern artist who equips traditional stories with a historical perspective, turning them into micro-stories told by many voices. Olivier de Robert will tell us a story that has not been told, has been kept in silence, has poorly marked its presence in contemporary French people’s awareness (let alone Polish listeners), namely the story of Cathars and their extermination. A Polish version of musical stories about Cathars has been prepared with the festival in mind. It is in the form of original songs by Sebastian Krajewski, accompanied by Ars Nova ancient music ensemble.

Dafydd Davies-Hughes, from Wales, is another storyteller invited to the festival who will present his original programme. Dafydd thinks of a storyteller as a “builder” of a local community, someone combining the art of storytelling and traditional technologies and crafts, the proximity of local nature, and establishing human bonds.

This year, Polish storytellers will utilize various inspirations, from oral literature revolving around oblivion and repressed in collective memory through the sung narration of ballads, the organic co-existence of traditional storytelling and craftsmanship, to a contemporary dialogue with Nasreddin Hodja’s legacy and, last but not least, narrations of women’s wrath. A narrative project of the neTTheatre , Workshop of Memory”, developed specifically for the Festival and performed by Patrycja Dołowa and Paweł Passini, will be a special event at this festival. It is a haunting story from the time of the Holocaust, a story about a Jewish and a Polish mother, brought to life from silence.

Bearing in mind the Festival’s leitmotif we have scheduled (on top of the morning and evening spectacles) performances which combine the art of storytelling and traditional technologies including Dafydd Davies-Hughes’s workshops, and Jan Blake’s master storytelling workshops held in Centrum Sztuki Współczesnej Zamek Ujazdowski (Centre for Contemporary Art The Ujazdowski Castle). They will be followed up by interactive activities in public space including Storytellers’ Contest conducted by Olivier de Robert and Jarek Kaczmarek. An opportunity will also avail itself to witness two-voiced weaving and put into practice artistic interpretation under the auspices of our master, Magda Lena Górska.

We strongly encourage you to join us in the sawing/weaving/sculpting of our collective and individual stitches of memory. After all, storytellers need an attentive and receptive audience! 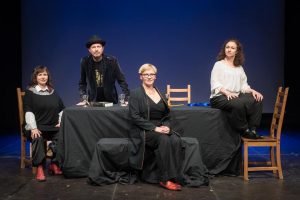 10:00  Suddenly in the Depths of the Forest. When animals leave us – by Amos Oz – Beata Frankowska, Sebastian Krajewski

11:30 The Thread. A Story of Yarn and Words – Aneta Cruz-Kąciak, Agnieszka Jackowiak

11:30 The thread. A story of yarn and words – Aneta Cruz-Kąciak, Agnieszka Jackowiak

10:00  A Night of Stories. Two-voiced Stories, attended by all the festival guests.

05:00 p.m. Suddenly in the Depths of the Forest. When animals leave us by Amos Oz. –  Beata Frankowska, Sebastian Krajewski

Make sure to copy Registration number after successful submission.

Thank you for payment.

Your ticket for the: THE 14TH INTERNATIONAL STORYTELLING FESTIVAL