View all members View all events

She was created in 1980 by Abbi Patrix and is composed of storytellers and musicians. It is in residence at Anis Gras, le Lieu de l'Autre in Arcueil, just outside Paris. The company’s work is based on repertory, a crossing of disciplines, collecting stories, and collective creativity, always at the service of a renewed art form: storytelling.

The territory, an extraordinary area for the emergence of contemporary storytelling

The company’s repertory is made up of a lively and diverse fund of stories that becomes more enriched as the productions come into existence. It has over the years created more than 25 different performances. More specifically, the company, through its residency programmes, travels across the Region Ile-de-France, collecting life-stories and urban tales, using the words and language of today, thus building up a repertory rich in stories and legends inspired by the territory and its inhabitants.

The crossover of disciplines

The company invites artists from other disciplines such as choreographers, composers, musicians, actors and visual artists to share the adventure of its original creations, where all kinds of different confrontation have been experimented. Research sessions on the link between storytelling and music are organised on a regular basis.

The company has worked with two young storytellers and musicians, Delphine Noly and Marien Tillet, accompanying them in the production and distribution of their creation projects. These two artists, who are still exploring their art(s), in search of a close dialogue between storytelling and music, were chosen by Abbi Patrix to start a new collaboration of transmission and artistic exchange. 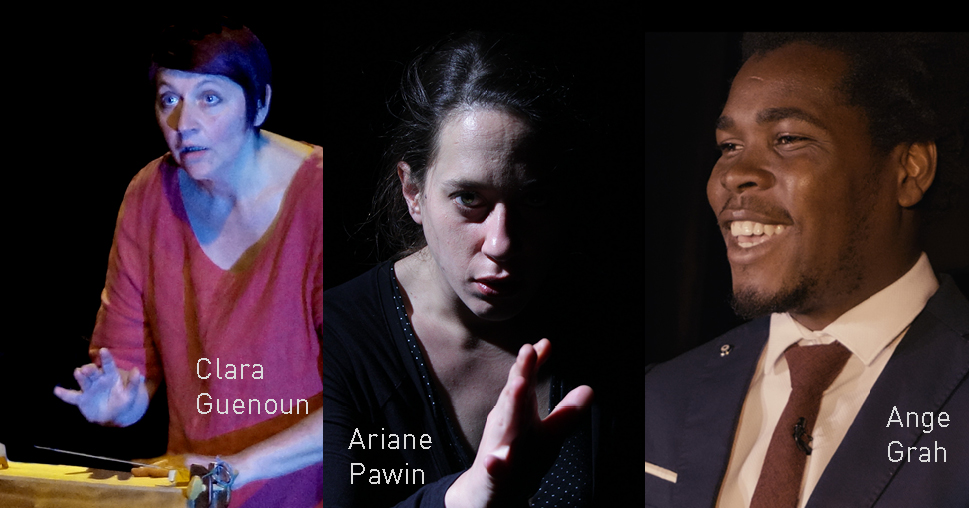 Trained at the Drama School Jacques Lecoq in Paris, Abbi Patrix has been exploring the art of storytelling for the past thirty years with his Compagnie du Cercle, founded by him in 1980.

Working either as a solo performer or with other artists, he has a taste for mixing the spoken word with other disciplines such as dance, music and mime. His work is at the cross-roads of theatre, music and movement, enriched by multidisciplinary material, on a permanent quest for new ways and voices to enrich the form of storytelling: an art which is developing today with great impetus in many different places in France and abroad. In his productions Abbi Patrix uses both personal and contemporary forms, which he constructs using different sources: traditional stories, life-stories, diaries, his own memories and literary texts. 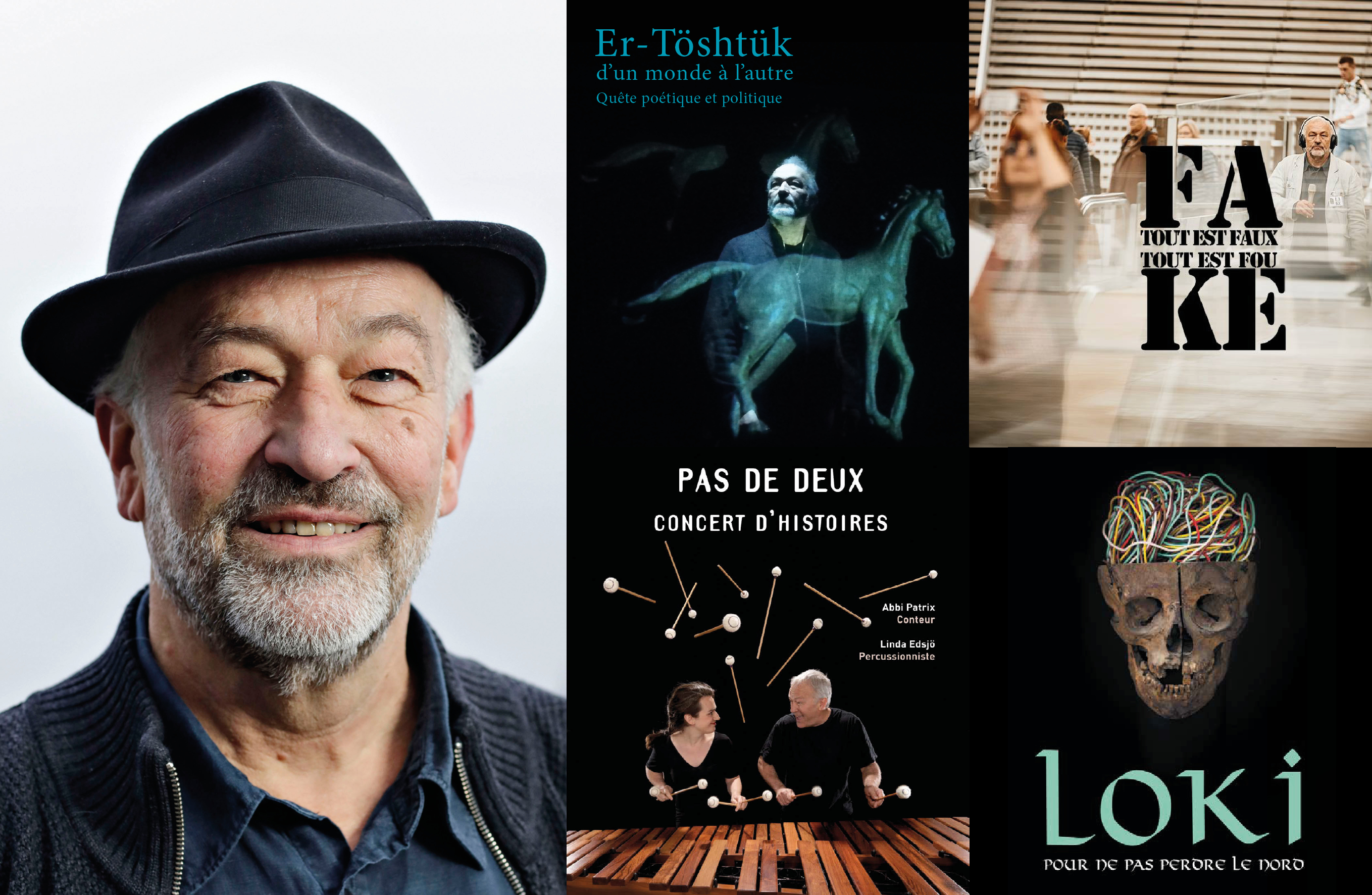 Half-Norwegian and half-French, Abbi Patrix always had a taste for the international and artistic exchanges. He has toured widely in France, Great Britain, Scandinavia and West Africa and performs in both French and English.His shows: To the Ends of the World , The Companion and  Pas de deux were performed at the Barbican Centre, the Soho Theatre and the Shakespeare Globe Theatre in London, at the Times Cheltenham Literature Festival, as well as in different storytelling festivals: the Scottish Storytelling Festival in Edinburgh, Beyond the Border in Wales, Brighton Storytellers, the International Storytelling Festival of Jonesborough in Tennessee USA, and festivals in Denmark, Sweden and Norway. He also takes part in conferences and gives master classes worldwide.

Abbi Patrix is also Educational Director. He has been running for fifteen years « Le Labo » a collective and multi-disciplinary space for research, improvisation and transmission in La Maison du Conte. (an Arts Centre in the suburbs of Paris dedicated to the art of storytelling in all its forms). He is currently continuing a compagnionship  work at Anis Gras, le Lieu de l'Autre, in Arcueil.

His powerful rhythmic work has earned Abbi Patrix an international reputation as one of the greatest of Europe’s performance storytellers. Some of his work is published by Editions Paradox in the series Conteur en Scène.

Inspired by the World Storytelling Day, Mix up is a French festival that promotes storytelling in new, experimental and multilingual forms. Compagnie du Cercle and its director Abbi Patrix started the festival in 2018 with a focus on staged storytelling in all its forms. In 2019 a second, international edition hosted 20 artists in 15 languages. This third edition gathers storytellers and musicians in original venues in Paris to celebrate human’s imagination in all its diversity. A beautiful journey in various styles revealed by an art form that blossom in Europe today. 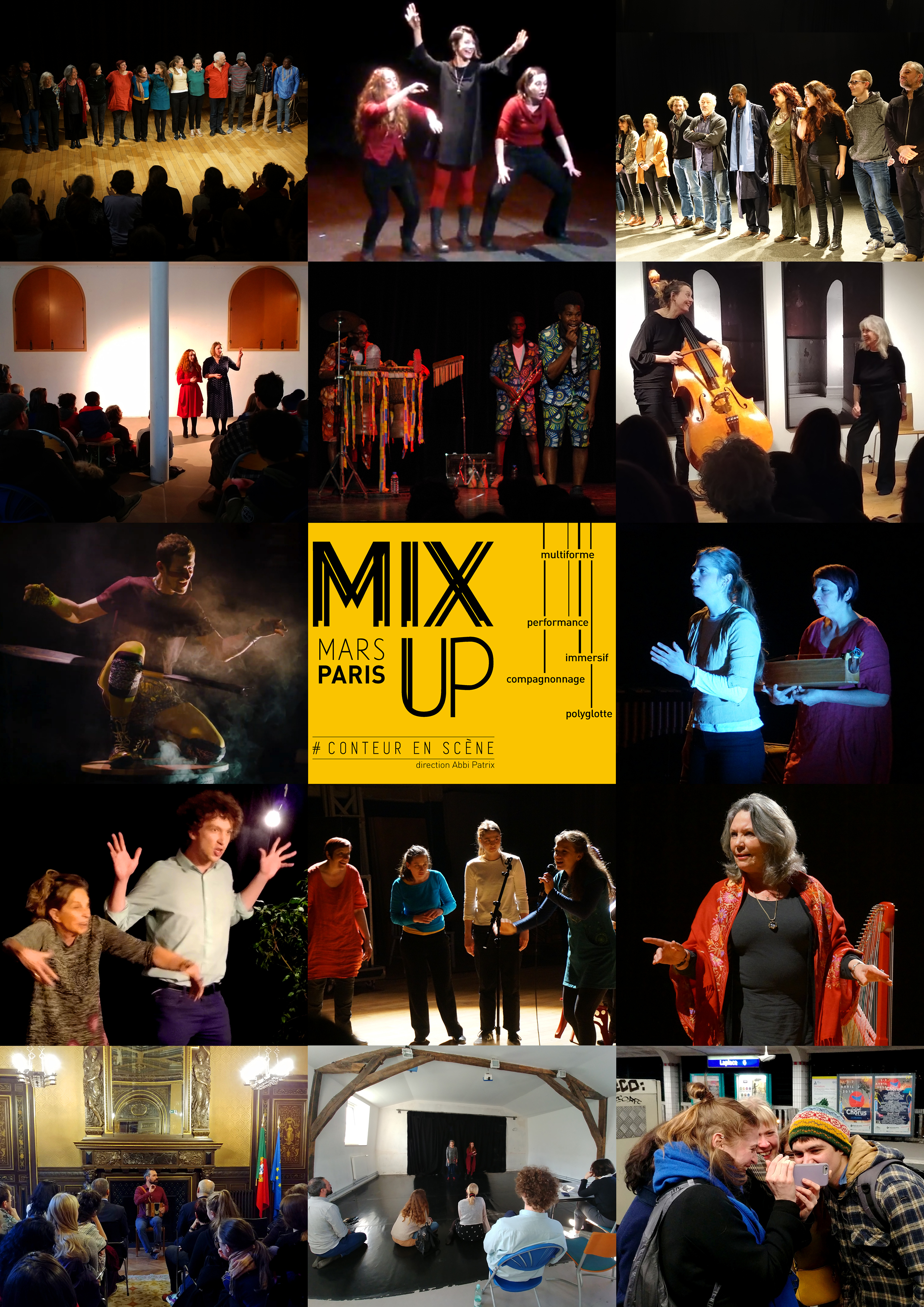 There will be surprising encounters and beautiful companion ships. We will all along the festival question the meaning of wonder tales and the place they can have in our modern world. We shall host a roundtable discussion with the finest specialists to exchange on the subject of wonder tales and bring their vision of the function of these tales in our broken world and which stories will be told tomorrow. With the help of Fest, the European network, we have invited a french speaking Norwegian storyteller for a Scandinavian evening mixing film, music and stories on the theme of Women from the North. We will travel to Amazonia and Greece. We will listen to stories in the Dark. And then, Peer Gynt will lead us through an amazing experiment of sounds and words. We look forward to share this program that reflects the spirit of adventure that is enlightening us. 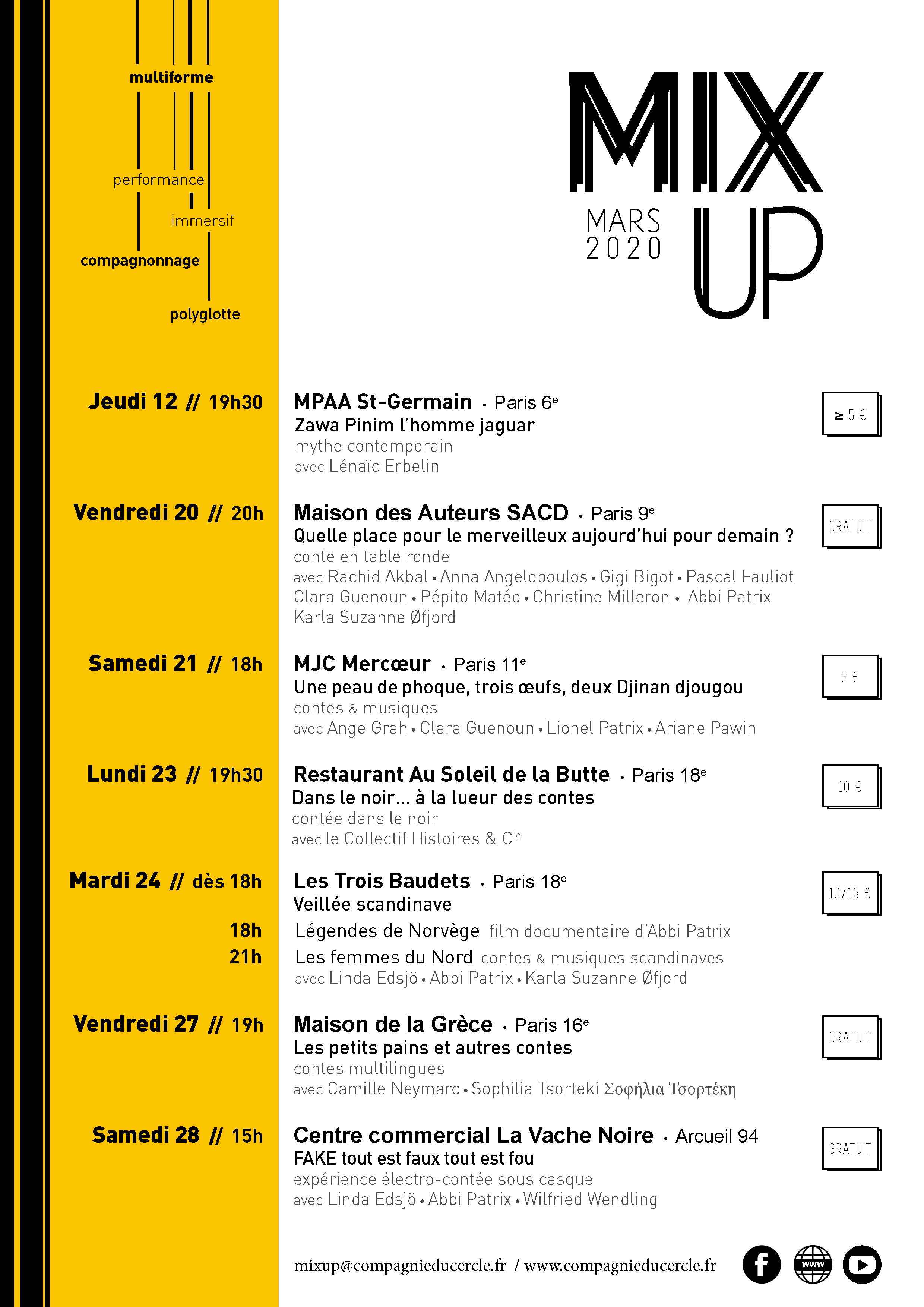